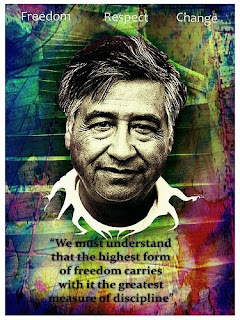 Today, we honor a man who dedicated his life to fight for the rights of Farm Workers as well as Animals; Cesar Chavez actively protested the use of pesticides in agriculture, and racial and economic discrimination in the industry. Chavez co-founded the National Farm Workers Association which later became the United Farm Workers (UFW).

As a result of Chavez' struggle to help bring about social justice and change, our produce is now harvested and handled by workers who are treated fairly and justly across the country. Our food is now transported safely from the farms to our grocery stores; farm workers have access to restrooms and sanitary conditions; farm workers have clean drinking water in the fields and now have the right to send their children to schools as well as enjoy a break from work. His infamous "Fast" in protest of pesticide use was instrumental in drawing attention to the need for more organically grown produce for the safety of not only the consumers, but also the men and women handling the produce who were being exposed to harmful carcinogens in the fields. Cesar Chavez is truly an inspiration.

Below are a series of quotes by Cesar Chavez as well as a few celebrities who were inspired by him.

"Once social change has begun, it cannot be reversed. You cannot un-educate the person who has learned to read. You cannot humiliate the person who feels pride. You cannot oppress the people who are not afraid anymore."
-Cesar Chavez
"Kindness and compassion towards all living things is a mark of a civilized society. Conversely, cruelty, whether it is directed against human beings or against animals is not the exclusive province of any one culture or community of people"
-Cesar Chavez
"Only when we have become nonviolent towards all life will we have learned to live well with others."
-Cesar Chavez

"When the man who feeds the world by toiling in the fields is himself deprived of the basic rights of feeding, sheltering, and caring for his own family, the whole community of man is sick."
-Cesar Chavez

"Our ambitions must be broad enough to include the aspirations and needs of others, for their sakes and for our own."
-Cesar Chavez

"I became a vegetarian after realizing that all animals feel afraid, cold, hungry, and unhappy like we do. I feel very deeply about vegetarianism and the animal kingdom. It was my dog who led me to question the right of humans to eat other sentient beings." 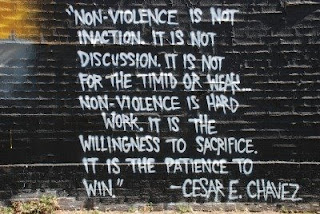 "We need, in a special way, to work twice as hard to help people understand that the animals are fellow creatures, that we must protect them and love them as we love ourselves."
-Cesar Chavez

"When your children and grandchildren take their place in America, going to high school and college, and taking good jobs and good pay--when you look at them you will say, I did this, I was there...at the point of difficulty and danger.
And though you may be bent from many years of hard labor, no man will stand taller than you when you say, 'I marched with Cesar Chavez!'"

"The work of Cesar Chavez is so extraordinary it must not be forgotten. He cared about the plight of workers...and he also was the first to bring our attention to the perils of pesticides. He was a great world leader and fighting the battle of civil disobedience, fasting, and protests that caught the attention of the nation and indeed the world."
-Ed Begley, Jr.

"He gave a voice to everyone that really needed to be understood."

"Here was a guy who's opinions were created on the job, in the fields, with the people and evoked a spirit and a challenge to all of us to do what is right. There are so few heroes left to us, there are so few people who stand up, who win their freedom personally, who help others win their freedom at a very high price. I can't think of a more inspirational image than the spirit of Cesar Chavez."
-Martin Sheen
Posted by KarinnaZ at 4:19 PM

Karinna is a Vegan Latina on a mission to help bring peace to the world through our diets and dedicated to promoting a Healthy, Sexy, Fun-loving Green lifestyle!

KarinnaZ
Los Angeles, CA, United States
With all of the challenges that humanity faces, it is important for us to become more aware of the effects of our actions. I value integrity and strong character, people with a good heart and a mission. I believe Humility is a VERY noble quality! I indulge in fine things that are easy on the environment. What are you doing to help IMPROVE our World? I'm impressed by people with a MISSION to help others.